Kim and I arrived in Cambodia earlier this week and as you’d imagine there’s plenty to keep us occupied and at times entertained.  Just have a look at what I captured on my phone through the car window yesterday. 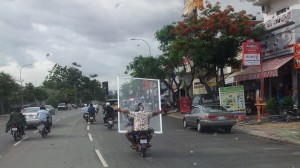 Yes that is a pane of glass and as you can see by the clouds in the background it’s the start of the rainy season.

As per usual in Cambodia this still means temperatures in the mid-high 30s (C) interlaced with tropical afternoon downpours.

Still a Saturday off and a simple Western style breakfast to start my day has given all the inspiration I needed to post a brief message.

Talking rainy season; I do still remember my first visit to Cambodia; in particular my visit to the local tip.

It was rainy season; mud on the tip was knee high, flies were everywhere and the smell was horrific.

At 37, I’d travelled SE Asia since my late teens but it wasn’t long before something confronted me that I’d never seen before.  There “nestled” in the flies, filth and stink was a piece of torn tarpaulin about 3m x 3m on the ground, 4 sticks at the corners and another piece of tarpaulin on top of the sticks.  Underneath the dirty canvas was a woman in dirty ragged threadbare clothes breast feeding her baby… the contrast to home was so stark… this was the world a little child was born into and probably the one in which the child would die with almost 1 in 10 Cambodian children not making it to their 1st birthday.

I have to say the whole experience was just so disarming.

The next few years in Cambodia remained chaotic.  It was like present day Afghanistan. Cambodia’s current leader led a coup in 1997 which saw gun battles and tanks rolling down the centre of the capital Phnom Penh.

There was much soul searching; what to do?  Should I do anything?  At the time friends and colleagues thought I was crazy.  Who in their right mind would want to go anywhere where 6 Westerners (2 of them Aussies) had been abducted and killed in the previous 12 months?  Maybe they were right.

What could a dentist from Perth do to make a difference in a place like this?  Then again how could I treat this tragic picture like a scene from a movie?  By 1999 it became clear; the best place to start rebuilding was a new generation of leaders to replace the education vacuum.

2 Responses to Just another day in Phnom Penh…